Pikeville Medical Center CEO Donovan Blackburn, a 2020 recipient of the BPI Best Practice CEO Award, was new to the healthcare industry when he joined the hospital team three years ago. That didn’t stop him from hitting the ground running. In those three short years, Blackburn has taken the medical center from deficit to profit. He expanded the hospital to include eastern Kentucky’s only children’s hospital, complete with an autism center. He created a grant foundation that has brought more than $17 million to the area, investing in the hospital’s cardiovascular and cancer centers. When other regional hospitals were cutting their staff, Pikeville Medical Center added nearly 300 new staff members and medical care personnel, with an additional 300 new positions expected to be hired within the next 18 months.

Donovan Blackburn credits the success of the hospital under his leadership to a shift in culture. As a leader, Blackburn said, his goal is to provide guidance toward the hospital’s mission while enabling employees to use their expertise to further organizational goals.

Blackburn grew up in Pikeville but moved away as he pursued his career, most of which in leadership roles for retail organizations. When the post for Pikeville City Manager became available, Donovan Blackburn was encouraged to apply by friends in city leadership. He spent 14 years in that role. When asked about retiring and running for county judge, Blackburn said the only organization he would be interested in furthering his career with was Pikeville Medical Center because he knew how important it was to the community and the region.

He was hired as assistant CEO with the intention of having two years to learn more about the healthcare industry as part of the hospital’s leadership transition plan. Due to unforeseen circumstances, Blackburn had to take over as CEO seven months after starting with the hospital.

Blackburn relied on his previous leadership experience to dive into the job. His primary concern was altering the leadership’s pyramid structure to create a collaborative model that allowed everyone to share their expertise and ideas and expedite decision-making.  He invested in employee training and communications and brought in a marketing firm to coin a new slogan for the hospital: “Together, we rise.”

That leadership approach has allowed the hospital to recover quickly from the financial shock of canceling all elective surgeries during pandemic shutdowns in the spring. The leadership team continues to meet to discuss surges in COVID-19 cases locally, and Blackburn said they are prepared for any challenges that come their way.

“If or when a surge happens, our staff will be there,” Blackburn said. “As always, they’re stepping up with confidence. They know they are valued and empowered to do what their training has taught them, to provide world class care for their family, friends and community.”

“I’ve been behind the scenes supporting them along the way.  My job was to simply start a conversation, hear their voices and let our staff shine.” 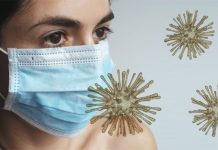