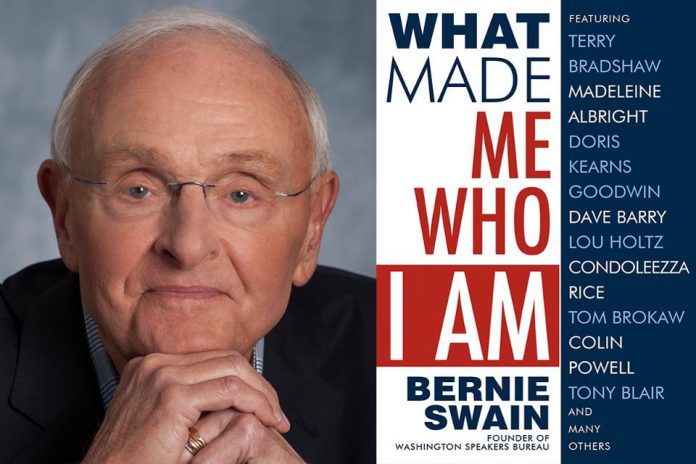 I had the honor of sitting down with the founder of the Washington Speaker’s Bureau to interview him on his greatest life lessons. His stories and learnings may be found in his new book, What Made Me Who I Am.

Listen to my full interview with Bernie here…

Bernie Swain is a legend in the speaking industry. He’s represented the greats from Colin Powell and Tom Brokaw, to Tony Blair and Ronald Regan. But like many entrepreneurs, his success did not come overnight, and it certainly didn’t come easy. He was the first of his family to go to college, and he didn’t have the background to be an entrepreneur. But still, he prospered. How? Passion.

In the end, over the past 35 years Swain has built a business that others try to emulate. His advice? “Put other people first—my speakers and my employees come first. I am a leader, not a dictator. Leadership is not about making the decisions and telling them how to do it. Set a moral standard and guidelines and give people the freedom to grow and strengthen themselves.” It’s about setting up a space to allow others to be passionate about what they do. Something to live by.

Here are 5 keys from Bernie Swain to help you follow your passion.

1. Don’t Take No for an Answer

Consumers have more choices than ever before—the question is, why would they choose you? If you’re going to make it in the marketplace, you can’t take “no” for an answer. You have to create a new reason for clients to say “yes.”

Swain quit a steady college athletics career to become an entrepreneur. He started Washington Speakers Bureau on a wing and a prayer in a tiny close space, with little experience. After a year, things weren’t looking too great. He kept hearing “no,” but he kept going anyway. After a year, something changed.

In a very non-traditional way, Swain offered his lecture agency services to Steve Bell, then an anchor for Good Morning America, who was hungry for more lecture gigs. “He said, ‘I’ll give you guys a chance.’ I was so excited I shook his hand instead of having him sign a two-year contract. I tried to justify it to my wife: What good would it do to hold him to a piece of paper? If he’s unhappy, he’ll walk away anyway.”

That mistake turned out to be that defining moment because others were attracted to his non-contract option, and business started taking off. And all because he didn’t give up. He found a new way to make a “yes.”

2. Flip Your Marketing Plan Upside Down

Don’t worry what the competition is doing, because you don’t want to be like the competition anyway. In order to stick out from the crowd, you have to be different. Innovative. Think outside the box. Approach it in a totally new way. Flip your marketing plan on its head.

That was the only way Swain could differentiate his company and make it stand out. For Swain, it meant something completely unconventional. “We turned our marketing plan upside down. We talked Bell into doing a free speech.” It was unheard of at the time, but passion rarely follows the regular flow.

Bell agreed to do it, and Swain even got a hotel in Washington, D.C. to offer a free ballroom due to all the free publicity and eyes it was about to get. The idea worked. Six hundred people showed up, and by the end of the night, Bell had seven engagements lined up.

3. Learn from Others, then Teach Others

You can learn something from everyone, be it clients, managers, mentors. Absorb all you can, and then when it’s your turn, teach others. When people with like-passion gather, more passion follows.

Over the years Swain and his team have represented so many people who have had knowledge and experience to pass on. Swain has learned a lot about life and business from them. Now, Swain is passing on what he learned. In his new book, What Made Me Who I Am, Swain talks about the defining moments of 34 others he has represented.

But these aren’t stories about their success in their professional lives—it’s about their personal lives. “I wrote extensively on personal lives because many came from humble beginnings. I wanted to capture that so people could see themselves in these stories. This is a book full of personal turning points.”

No risk, no reward. In business, as it is in life, how will you know what is possible without taking a leap?

Swain’s biggest break was booking Ronald Reagan. It seemed almost unattainable, but they took a risk and pitched anyway. They competed with a staggering 30 other agencies. “Nobody expected it to be us, so I braced myself for a letdown.” When the call came, Swain was sure it was a mistake, but indeed Reagan had chosen Washington Speakers Bureau. When Fred Ryan explained it all to him, Swain became even more honored.

“He said, ‘You didn’t come in first, you came in second. He wanted to give you a chance; he knew you were a new company.’ I thought that was incredibly amazing for a public figure. Risking his legacy on people who could easily make a mistake because we were less experienced. But he believed in his principle that was more important. We need to live by our principles and guidelines.”

In Swain’s life, there was another turning point that to this day helps him remember how to approach each day. He had been trying to represent Notre Dame coach Lou Holtz, who had at first turned them down. But then Holtz sent a letter that said, “I’ll do this if I can trust you.”

That letter and the word “trust” kept playing in Swain’s mind. “We all have aspirations. Those are the things we can’t lose sight off,” he said. “We start taking short cuts. I needed to make sure I was focusing on honesty and trust. I could have easily got off the path if I hadn’t paid attention to Holtz’s letter.”